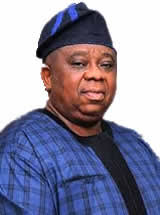 Medical Practitioner and former Member, House of Representative, Dr. Babatunde Samuel Adejare was born on 9th June, 1961. He obtained the First School Leaving Certificate (FSLC) from St. Paul’s Catholic Primary School, Ebutte Metta, Lagos between 1967 – 1973 after which he proceeded to St. Anthony Grammar School, Esure, Ijebu Mushin, Ogun State (1974 – 1980) where he secured the West African School Certificate (WASC). Thereafter, he attended International School, University of Ibadan for the Higher School Certificate (HSC). He completed his M.B.B.S at the College of Medicine, University of Ilorin (1983 – 1988) before crowning it up with a Master degree in Public Health from the Lagos State University.

He worked in many places where he garnered invaluable experience and these include as Honorable Member of Representative (2011 – 2015) representing Agege Federal Constituency. He was the Caucus Leader, Lagos All Progressive Congress (APC) Sub- Committee Chairman, Health and South-East. He was known for the overall responsibility of providing qualitative and all-enduring legislation in the form of bills, motions and oversight functions. In 2003 – 2011, Hon Dr Adejare was in Lagos State House of Assembly as Member Representing Agege C2 Constituency and Chairman, House Committee on Health. He also worked as Chief Medical Director in Graces’ Medical Centre Olurinde Street, Agege in 1993 -2003.

In the course of his legislative career, Hon. Dr. Samuel Adejare sponsored many bills and motion on the urgent need to investigate the Mindless Waste of Nigeria’s Resources spent on Arbitrary Charter and Maintenance of Challenger 850 Aircraft for non-official use by the then Minister of Petroleum Resources (2014), a bill to Amend the Child Rights Act (2013), Federal Capital Territory Traffic Management Authority Bill (2014) and co-sponsored, Nigerian Mental Health bill (2013). He bagged many awards some of which are:-

Dr Adejare was later called upon to further contribute his quota to the development of Lagos State when he was sworn- in as Honorable Commissioner, Ministry of the Environment in October, 2015 by His Excellency, Mr. Akinwunmi  Ambode, the Governor of Lagos State.

In the course of his work as the head of the Environment family, Adejare had received many awards in recognition of his contributions to environmental regeneration in Lagos State. Some of the awards were presented by:

Adejare is championing the new plans in waste management which would involve Public Private Partnership (PPP) in domestic waste management, investment of about 86billion naira in 4 years and the deployment of over 600 new Mercedes Benz Compactors and the engagement of street sweepers in all wards in the state.

Dr Adejare says this new dimension in waste management which will involve closure of existing Landfill sites, their replacement with engineered Landfill sites, creation of transfer Loading Stations in Local Government Areas, deployment of over one million ultra-modern waste bins with censors to monitor their movement against theft, is aimed at injecting technology and resources into waste management in Lagos State through partnership with world renowned waste managers.

The expected impact of this new arrangement is that waste disposal will no longer be a challenge as efficient system will be on ground for effective management of waste which will inevitably push cart pushers out of business.

For his leisure, he loves football, Current Affairs, Community Development and Travelling. A husband of one wife who is married to Barrister Oyinlola Adejare, they are blessed with wonderful children (male & female). 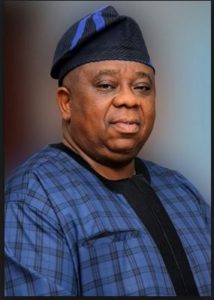