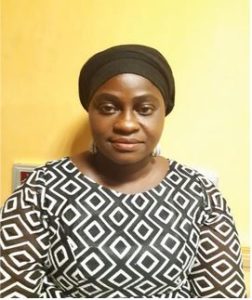 Mrs. Ileyemi, Modupe Abiola was born in Ibadan on the 7th of October, 1968.
She started her education at Seventh Day Advertist Primary School, Old Ife Road, Ibadan from where she proceeded to Queen’s School Ibadan in 1978 to 1983, she did her A’levels at Federal Government Girls College Sagamu between 1983 – 1985 and later gained admission to Lagos State University through direct entry to read History in 1985.
She obtained B.A History as one of the pioneer set of LASU in 1988.
She started her career in the Lagos State Civil Service in April, 1990 as Information Officer II with Lagos State Ministry of Information and Culture.
She obtained a Certificate in News Reporting from Nigeria Institute of Journalism in 1991.
She has since served as Public Relations Officer and later as Director of Public Affairs in various Ministries and Parastatals across the State.
She is presently the Director, Public Affairs and Research in Ministry of Waterfront Infrastructure Development.

Mrs. Ileyemi, Modupe is a member of the Nigerian Institute of Public Relations and Nigerian Union of Journalism.